I’m currently editing a book about a zoo. One of the things it’s drawn my attention to is the oddity of animal plurals. Discounting irregular forms such as ‘geese’ and pedantry such as ‘octopodes’, there seems to be a whole thorny area around what are known as ‘zero plurals’, where the plural is the same as the singular. There is a small list of canonical examples:

Our old friend Wikipedia says: ‘As a general rule, game or other animals are often referred to in the singular for the plural in a sporting context: “He shot six brace of pheasant”, “Carruthers bagged a dozen tiger last year”, whereas in another context such as zoology or tourism the regular plural would be used.’ This is corroborated in a PDF I found from the University of Granada (yeah, OK, not the leading source for English grammar, perhaps): “Nouns referring to some other animals, birds and fishes can have zero plurals, especially when viewed as prey: They shot two reindeer. The woodcock/pheasant/herring/trout/salmon/fish are not very plentiful this year.” And thanks to Colin Batchelor for pointing out that Eric Partridge (of Usage and Abusage fame) regards this as a snobbish usage by big-game hunters; and further that the Cambridge Grammar of the English Language (CGEL) includes the above words as ‘base plural only’, then elk, quail and reindeer as ‘base or regular plural’, and elephant, giraffe, lion, partridge and pheasant as ‘base plural restricted’.

(In the book I’m editing, the writer sometimes writes phrases such as “tapirs and capybara”, but has “tapir” as plural elsewhere. I imagine the capybara example is explained by subconsciously thinking that it is a Latin neutral plural. Doing a bit of crowdsourcing with Google reveals that for both animals the -s form appears far more in phrases referring to ‘two’ or ‘a pair of’ both types of creature, and indeed for the much-victimised pheasant, suggesting people do generally favour a simple English plural rather than the snobbery of the hunter.)

…there seems to be a common semantic factor among the zero-plurals: they all denote animals, birds or fish that are either domesticated (SHEEP) or hunted (DEER), usually for food (TROUT, COD, PHEASANT). It is true that the relationship is not hard-and-fast: there are plenty of domesticated and game animals which have regular -s plurals (e.g. COW, GOAT, PIGEON, HEN). Nevertheless, the correlation is sufficiently close to justify regarding zero-plurals as in some degree regular…

Hm, does “not hard-and-fast” really mean the same as “sufficiently close”? It’s not what I’d call a rule – more a matter of usage as Partridge suggests. And there are non-animal counterexamples such as ‘aircraft’ in any case.

And hang on, what about this buffalo madness from Mark A Wickens’ Grammatical number in English nouns: 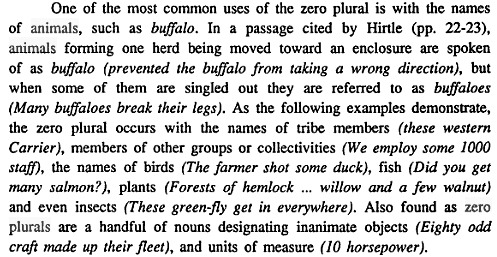 As far as I can see this is a grammatical minefield and nobody has a cleer steer. Or should that be bison. As for the book, I’m going to err on the side of English plurals with -s unless there is a compelling reason not to, such as a lexicographer approaching me with a blunderbuss.

One thought on “Animal words are strange fishes”