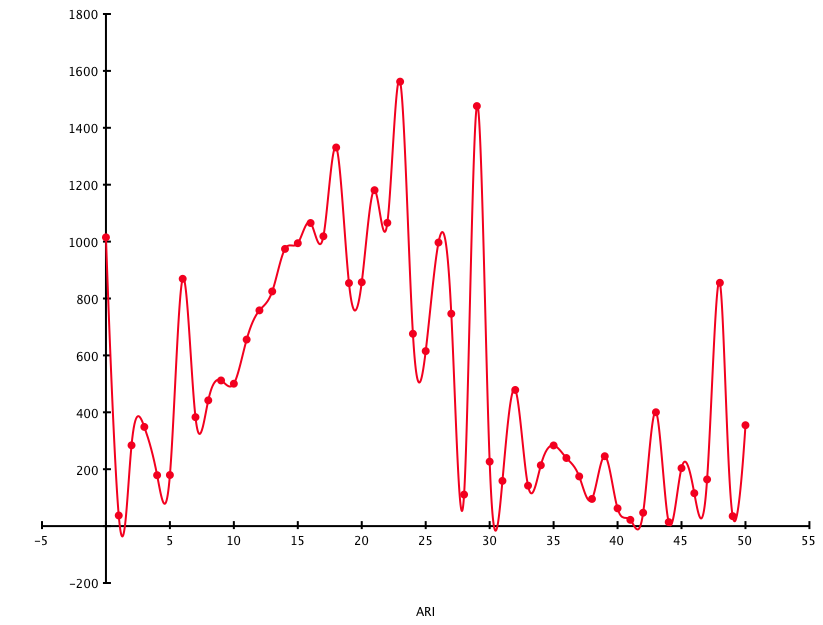 For the last decade I’ve been following the fascinating work of Gerd Gigerenzer and colleagues (especially Dan Goldstein) – as briefly as I can state it, he has identified a number of very simple heuristics which outperform far more complex models for decision-making processes or making predictions about certain kinds of data (this stuff has partly inspired my Feweristics project). The most accessible explanation of all this is in his book Gut Feelings, where he explains things such as the recognition heuristic, and how it can be used to predict the winner of Wimbledon, or build a stock market portfolio that outperforms many experts, and so on.

Now two researchers, inspired by Goldstein and Gigerenzer’s ‘take-the-best heuristic’ have applied the less-information-beats-more methodology to the US elections since 1972. You can read their paper, Predicting elections from the most important issue facing the country (PDF – I found it via Decision Science News, the work of GG’s collaborator Dan Goldstein), though the bare bones as follows.

In the abstract, authors Andreas Graefe and J Scott Armstrong say that their simple model, called PollyMIP, “correctly predicted the winner of the  popular vote in 97% of all forecasts. For the last six elections, it yielded a higher number of correct  predictions of the election winner than the Iowa Electronic Markets”. Basically, they used a database of pre-election polls to identify what voters thought was the single most important issue each time (this varied over time before the election, in some cases more than others), then used the same database to pull out poll results for which of the two candidates (ie Democrat or Republican) they believed would deal with that issue best (they looked at all polls up to 100 days before the election). In passing, they corroborated other research that the incumbent party always starts with an advantage. (The authors note in their paper: “In the real world, people usually have to make decisions under the constraints of limited information and time, which is why models of rational choice often fail in explaining behaviour.”)

In full, their PollyMIP heuristic works thus (taken verbatim from their appendix):

2.B (most important problem similar to the day before)
Stopping rule: Take the PollyMIP score (see step 3) from the previous day. Move to step 3.

Or, more briefly: “(1) Identify the  problem seen as most important by voters, (2) calculate the two-­party shares of voter support for the  candidates on this problem and average them for the last three days, and (3) predict the candidate with the higher voter support to win the popular vote.”

Not bad for predicting election results 97% of the time. I’d love to see whether this would work for Britain’s elections, too. (They used the iPOLL databank – anyone know if there’s an equivalent for the UK?)

I’ve been analysing data from 50000 Twitter accounts, recorded by my Twanalyst tool (tracks your Twitter stats over time, and analyses your tweeting style and personality). In Part 1, I looked at how people’s profiles might correlate with their number of followers, and a few trends emerged.

This time I’ve been looking at the relationship between follower counts and the following:

In each graph below, the X-axis shows the above data, with follower counts on the Y axis. The Y figures are averages taken for each value of X.

The green line is the estimated line of best fit by OmniGraphSketcher (excellent Mac graphing program) – though it seems slightly generous. (I’ve cut friends off at 100000, as the few data points above that are so high that the rest of the data becomes unclear.) Roughly speaking, and unsurprisingly, there’s a one-to-one relationship between friends and followers. Want followers? Make friends.

Obviously you need to have been on Twitter for a little time to get followers – but overall there isn’t really any strong correlation noticeable between how long you’ve been using it and how many followers you have. It must be what you do with Twitter that matters, rather than simply Being There.

This doesn’t seem to show much, either. What might be helpful is to measure this against time…

When you measure the average number of tweets per day (since joining Twitter, and I’ve ignored a handful of rates over 300/day), a broad message comes across that you’re best of tweeting up to around 30 times a day – above that, and you risk putting people off. Again, this isn’t exactly surprising.

So there aren’t really any profound observations here, sorry: the data seems to corroborate common sense.

In the third and final part of this series, next week, I’ll see if there are any correlations between tweeting style (as recorded by Twanalyst – number of retweets, posting of links, how much you reply to other people etc) and follower counts. Thanks for listening!

PS: I’m indebted to the UNIX BASH Scripting blog for an awk script that helped crunch this data.

Running Twanalyst has given me access to large amounts of data, which I’m slightly-too-addicted to crunching. Inspired by this post at Social Media Today, which analyses the popularity of Twitter users according to the words they use in their tweets, I realised I have a large database of people’s Twitter biographies. Do the words people use in their self-penned descriptions have any influence on the number of people who follow them? (Well, presumably yes, given that ‘sod off and don’t follow me’ would be an ill-advised way of getting a large following.) But which words?

I’ll come back to that – first, some more general data.

I analysed around 50000 accounts with data stored at Twanalyst. The average number of followers was 1449. Some gleanings:

Of those who use a background picture, by the way, the most popular ones of those provided by Twitter are themes 1,2,5,9 and 10 (all with > 1000 users – 1 has > 10000) – but only theme 15 took the follower count above average, and that’s probably just because the Hollywood actor Neil Patrick Harris (with around 130,000 followers) uses it! (I haven’t mined whether using your own background picture is better than using one provided by Twitter, though the above data implies that.)

Back to the words.

I got rid of stop words, then mined the biographies for words (mostly nouns, plus a few selected adjectives) which describe someone’s role in life (whether career-based, such as ‘programmer’, or personal such as ‘wife’). The top 10 words (by popularity) were: geek, writer, student, developer, lover, father/dad, mother/mom, blogger, photographer and designer. I only looked at words used by 1% of by sample set or more.

I can’t claim using the right words is a guarantee of a high follower count, of course – that must relate to what you write as well as who you are; but there do seem to be some general trends (eg expertise rates high, and nobody wants to read what students have to say!). Oh, and if you use the phrase follow me in your bio, the average follower count is 2418…

Another time I’ll mine some data about how people’s Twitter behaviour (eg how much they follow others, how often they tweet, what sort of tweets they write…) relates to follower counts too. Watch out for Part 2 some time in the next few weeks. If I find any more time (ha!) I might create a tool where you can look up terms yourself.

(Oh, and you can follow me at @hatmandu, of course!)

Here’s another angle on the same data set. Out of 39975 profiles which include descriptions, we find the following:

It’s noticeable that writer appears at all levels – from the hugely successful to the obscure and aspiring, just like in real life. It’s hard not to spot that the very top end accounts are full of founders and speakers etc. And the bottom: those pesky students again. I’m surprised blogger fares so well – but perhaps people like bloggers who write about a specialist subject?

I’ve just launched a new tool at Hatmandu.net, a text content and keyword analyser – in theory useful for search engine optimisation, but also to get the general gist of a text.From the notes:

This text content and keyword analyser is intended to give a more precise indication of a text’s most important words than other tools available. Most keyword analysers use simple word frequency (which is also shown here anyway), but that doesn’t relate the specific text to the language in general – common terms such as ‘people’ and ‘time’, for example, appear in many documents, but do not necessarily indicate the essence of the particular text being analysed. This analyser uses the TF-IDF statistical method to relate the frequencies of words in the specific text to their general frequencies in the British National Corpus. I am indebted to Adam Kilgarriff‘s version of the BNC, which I have adapted considerably for this tool. This analyser mainly uses the nouns in the BNC, on the basis that these are the parts of speech that best indicate the subject matter of a text. (At some point I hope to produce a version using an American English corpus, though I’d be surprised if the results were very different.)

It works with Twitter accounts (though it only reads the last 200 tweets, which may not form a usefully large body of text), and URLs where my humble scraping tool is able to extract the text successfully – most useful is the ‘paste text’ field, which will accept up to 1Mb of text (about 200,000 words) – so will analyse entire books if desired. Livejournal users can enter their URL (http://username.livejournal.com) assuming their account is public.

It’s a bit experimental at the moment, but hopefully might migrate from ‘possibly fun’ to ‘possibly useful’ in due course!